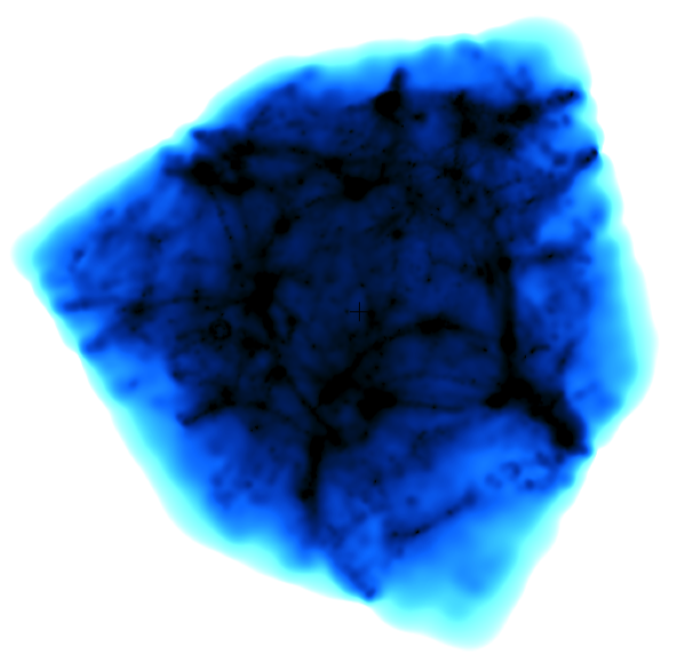 The initial particle distributions used in the tests were extracted by resampling low-redshift outputs of the EAGLE project. The density of the particles spans 8 orders of magnitude, requiring smoothing lengths changing by a factor of almost 1000 across the simulation volume.

SWIFT is a computer program designed for running on supercomputers that simulates forces upon matter due to two main things: gravity and hydrodynamics (forces that arise from fluids such as viscosity). The creation and evolution of stars and black holes is also modelled together with the effects they have on their surroundings. This turns out to be quite a complicated problem as we can’t build computers large enough to simulate everything down to the level of individual atoms. This implies that we need to re-think the equations that describe the matter components and how they interact with each other. In practice, we must solve the equations that describe these problems numerically, which requires a lot of computing power and fast computer code.

We use SWIFT to run simulations of astrophysical objects, such as planets, galaxies, or even the whole universe. We do this to test theories about what the universe is made of and how it evolved from the Big Bang up to the present day!

The initial paper for “The SWIFT code” has been released by Gonnet et al. 2013. For more information and relevant publications please visit Durham’s project description page or contact Matthieu Schaller.